Things to remember for next year's trip to see Santa:

#1. Don't go on Christmas Eve day. In fact, avoid the Burbank Mall entirely on December 24th. T'was madness. Like being trapped in a Hieronymus Bosch painting, but with cheesy holiday decor.

#2. Have back up. We waited in line for over 90 minutes. It was just me and Cooper and as I scanned the long, long, long (one more) long line, I saw that it was mostly parent "A" holding a spot while parent "B" was off occupying their child. Good plan. Wish I'd thought of it.

#3. Have toys on hand. All I had for Cooper to play with during that painfully slow-going hour and a half was some spare change. He got 17 minutes of joyous play out of five quarters, three dimes and 2 nickles.

He did the best he could, but Cooper became agitated and cranky and grouchy, all at the same time! I nearly gave up at mid-line. I thought, "Next year is fine. He won't even remember this."

But then Santa stood up and waved to all of us in line. I heard Coop say with such clarity, "SANTA?!" He tried to get Santa's attention by yelling lines from the classic stop-motion animated version of 'Rudolph the Red Nosed Reindeer,' which had quickly become his fave holiday film.

Picture my kid yelling these lines at the top of his lungs at Santa's throne while other children are sitting on his lap and making memories:

"You have a SHINY NOSE?"

The last one made me laugh. The little dentist elf sings it with gusto and my child captures the feeling behind the line perfectly. Cooper deserved a chance to meet the big man in the red suit, so we hung in there. 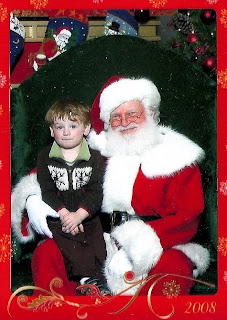 We finally got to the front of the line and Mr. Cooper could hardly speak. He didn't say a word to Santa. He became shy and quiet. Look at the little hands and the closed mouth. After all the freaking out and the screaming, I was shocked that he became so docile.

But then again, it is Santa. He is magic.

Whenever I pretended to be She-Ra, I'd fashion a tube top out of aluminum foil, wrap it around my torso and I was The Princess of Power.

And when I pretended to be Jem (the same costume as She-ra, just with matching foil skirt!) I was truly, truly, truly outrageous.

I would get lost in play and everything seemed colorful and fun. 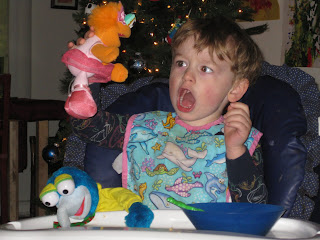 Now I watch my son act out Shakespearean tragedies with Gonzo and Zoe.

Better than any play I saw in college. This kid fully commits.