Is it just me, or does Coop look GIGANTIC? 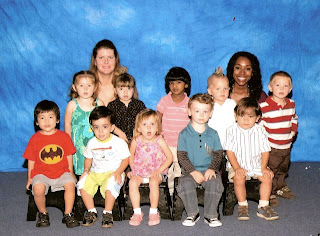 I've avoided writing about daycare thus far. After all, this blog is public and I want to be sensitive to everyone, most of all to Cooper.

Coop loves school. He adores his teachers. He lights up around the other children.

However, he has had some trouble adjusting. There have been reports of aggressive behavior, pushing, hitting and biting.

I always thought that two-year old boys were supposed to be tiny maniacs. First of all, they are TWO. Secondly, they are BOYS.

I never imagined that I would be in parent/teacher meetings that included words like "attention deficit" and "autism" and "Asperger's syndrome." Not so early in his little life, anyways.

No, I didn't arrange regular playdates for Cooper prior to entering school. Yes, we read together every night. Yes, I let him watch television--an hour of Sesame Street in the morning and 30-minutes of Muppet Show or Fraggle Rock before bed. No, he doesn't eat his vegetables.

And, no, I don't think there's anything wrong with him.

I've been told that I'm too close to step back and see.

They do have more experience with children that I do.

My gut and my heart says he does not have a developmental disorder. I think I need to listen to my senses first and go with my instincts.

Posted by Nicole Charbonneau White at 9:22 AM 5 comments