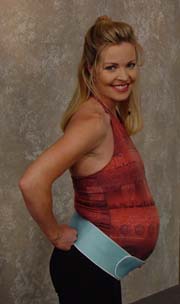 Dear Sweet Child O' Mine Within My Womb,

Look at this very pregnant, very perky lady. Her name is Leisa Hart. This image is proof that I love you more than I've loved anything else in my life...ever.

4-6 times per week, depending on whether or not I'm "pukey" in the mornin', I put on Ms Leisa Hart's DVD entitled "Fit Mama" and I work out to her pre-natal yoga program.

Truth be told, I hate exercise. Whaaaaaaaa!!! Whine!!!! I don't want to do it. I'm bad at it. I'm really good at being sedentary. I can lounge with the best of them. I excel at loafing.

But I recognize that in order for you to be a healthy baby, I need to at least attempt to be a healthy mommy. For the first time since I was enrolled in the swim team at age 10, I have a steady exercise regimen. Each time I would rather recline like a Roman with a pint of Ben & Jerry's Half Baked Ice Cream, I think about you growing inside me and it propels my fat bottom off the futon and to the yoga mat. I turn on Leisa and do my scoot & squats. I swear like a sailor at her and the overly enthusiastic smile she exhibits when she says, "Palms together, over your head. Get ready for 'chair' position." Oh, and let us not forget the joy and wonder of kegels.

Posted by Nicole Charbonneau White at 11:25 AM 2 comments 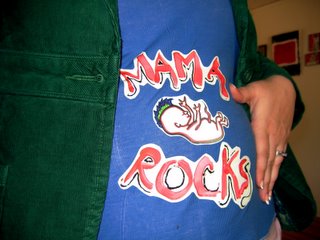 Dear Little Baby in My Tummy,

MY YOU HAVE GROWN! The doctor says you are a week ahead of schedule in your development. Mom and dad are overachievers, too! Congrats!

During your ultrasound, you refused to show us your eyes or genitals. What gives? Ok, it's fine that your hiding your genitals. Your father and I have elected not to know your sex until you pop out. Plus, and you'll learn this when you enter our world, it's a general rule of society that you keep your privates, well...private. But why hide your face? Are you shy or just teasing us? Either way, you take after your father.

Your spine is healthy. Your skull & femur bones are spectacular! We have a history of good femur in the family.

Your heart is the most perfect and beautiful thing I have ever heard. Now, I anxiously await your birth to hear you scream. Which, at least at first, will sound wonderful.

You seem to have found your first toy. You are playfully PULLING on my UMBILICAL CORD!!! We saw you do it! On a big screen! It's not a service bell, y'know. Just because you want Oreo cookies doesn't mean you can yank away at me. Here's a better plan of attack : force me to dream about the cookies in my sleep and I'm bound to break down next time I go to the market. 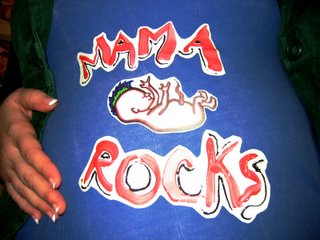 I've made this shirt for us. It shows off both my craftiness and roundness. It also speaks to the type of chick I am. The truth is kid, I DO rock! And when your a little baby, I hope you agree. It's when you turn 11 or so that worries me. You'll probably think I'm way lame and don't "get you" or your friends or your woes.

But even if you look at me like an out-of-touch mommy who wouldn't know punk rock if it pierced her in the tongue, I want you to know that I do understand. At one time I was COOL. Really. I have 4 -5 friends who can attest to that fact. I think I've even retained most of my coolness, even if nowadays I do get excited about kitchen appliances and tax breaks. Heck, I just got the latest Flaming Lips single!!! I'll play it up against my stomach for you later today. 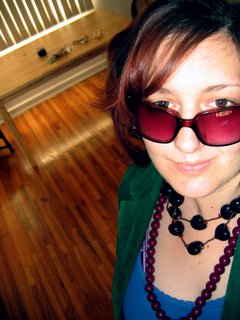 See you in June.

Posted by Nicole Charbonneau White at 9:33 AM 1 comments 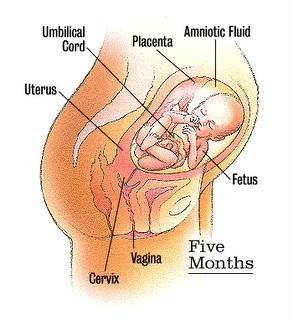 When I found out I was pregnant...I didn't believe it. You see, I wasn't even that late with my period. I peed on a stick on a whim. Low & behold, a bright blue plus sign stared back at me. It kinda made me feel like my pee was magic! But it didn't make me feel pregnant. I was sure it was a mistake--merely a false positive. Or perhaps I was being 'Punk'd.'

I took test number two. When the same blue crisscross appeared, I laughed...and then cried...and then laughed until I cried. But the funny thing was, I STILL did not believe it. SURE it was possible. It just seemed like a strange twist of events for the week. Sunday - clean apartment, Monday - get haircut, Tuesday - CONGRATS. YOU BE PREGGO!

I had plans to hang out in Westwood with my friend Andrew Wollman that afternoon. Without thinking, I stupidly ordered a beer at a bar. Then I panicked. I saw a floating image of the blue crisscross in the foam at the top of my beer mug. YIKES! Images of deformed fetal alcohol syndrome babies flashed and swirled inside my mind. I couldn't drink it. Andrew excused himself to use the restroom and I called my husband Jakob.

Me: "Oh, I should probably tell you that I took a pregnancy test and it said I was pregnant."

[Big pause. A pregnant pause, if you will. ]

Yeah, in retrospect, I should have said it to him face to face. But I reasoned that we shouldn't get overly excited since I hadn't been to a doctor yet.

We went to the doctor a week later and she confirmed it, adding that the tests nowadays are 99.99999% accurate. So keep that in mind ladies. Clear Blue Easy speaketh the truth.

Now, I'm approaching my 5th month. WARNING--I'M GOING TO GET WAY SCHMALTZEEE HERE: Everyday I fall more in love with the life growing inside me. And every night Jakob leans in to my stomach, kisses it and says, "Daddy loves the baby." 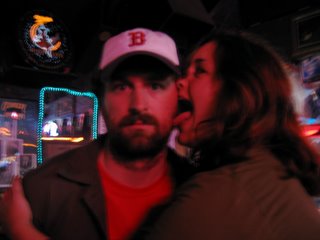 This is one of at least six photos where I am trying to eat my husband's face. He may be displaying a vapid look, but I know that he digs it. 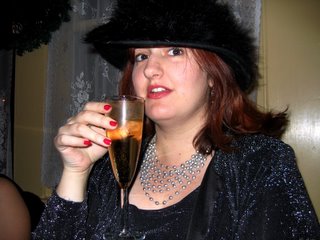 Things started off crappy right away with the inauguration of George W. Bush for term numero dos.

We were struck by hurricanes Stan, Wilma, Rita and Katrina. We were also struck with Star Wars Revenge of the Sith. Even if it IS better than the other prequels, was it really as "awesome," as you NEEDED it to be? Was it? WAS IT? The answer is NO!

Someone I know, or rather used to know, was murdered. I was in a car accident. I was laid off. Not enough people watched Arrested Development to impress the people at FOX to preserve a truly funny show. What a bummer this year was!

New Year's Eve was the perfect metaphor for the past year. My family & friends headed to a "party," that was being held at a classy, top-drawer, swanky joint. The food was great. The "party," sucked rancid bong water. The place was pretty much empty. The crowd was pretty much "old" and "farty." They hired some folks claiming to be a band. As they POORLY played classics such as "Proud Mary," and "Copacabana," we felt as though we were stuck in a Christopher Guest movie.

BUT...we still had fun. We laughed at it all. It's not about the runny poop that life shovels on ya. It's about how you react to it. As you can see from the photo, I still had a blast. Yep, that's a feather hat! And YES, those ARE sparkleeeees on my shirt. But, NO, that's not champagne in my glass. No booze for me for a while. All because of the last, and best, surprise that 2005 had to offer me...I'm pregnant.

Cheers. Happy New Year. Here's to all the new and wonderful things awaiting us in 2006!

For more photos of our New Year's Eve Bash-A-Roo, check out Flickr.

Posted by Nicole Charbonneau White at 9:41 AM 2 comments